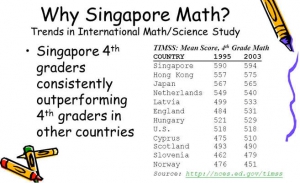 When your father is Jeff Bezos, the mastermind CEO behind Amazon, you can be sure you’re going to get a top-notch education. And indeed, Bezos and his wife, MacKenzie have taken some unique approaches to teaching their four kids, who are ages 12 to 17. “We tried all sorts of things,” Bezos’ wife, MacKenzie, told Vogue of home schooling their three kids, “including off-season travel, kitchen-science experiments, chicken incubation, Mandarin lessons, the Singapore math program…”

Singapore math, also known as the “mastery approach,” is a method of teaching mathematics that’s most prevalent in many Asian countries. Under the mastery approach, students learn a specific concept before moving on to more complex ideas, in a rigidly linear progression. Students aren’t grouped by their perceived intellectual abilities. Instead, all students perform the same work at the same time before mastering the concept and advancing to the next one together.

By contrast, US schools teach math using the “mindset approach,” which aims to teach students a more intuitive understanding of math concepts by starting with a broader concept before breaking down a problem into the specific steps for solving.

WHAT OUR PARENTS SAY?

MICS Singapore math class helps give children confidence in math, in a fun, yet challenging environment. We have been recommending the program to friends for many years and will continue to do so.

My daughter developed a lot of confidence in her math abilities as well as very solid math skills. She really enjoyed the group work (and her fun and funny classmates).

MICS Singapore math program has helped our children lay a very strong foundation in mathematics. Not only have they learned the various concepts in mathematics but they have also improved their problem-solving skills.”

The classes are interesting and motivating. My daughter loves that there are high expectations of her and that she really has to think hard to be successful.